Complaints about a need for critical writing on craft surface with great frequency. Drawing on the musical concept of “call and response,” this exhibition opens a space for critical dialogue and exchange between craft-based artists and art historians. From nearly three years of discussion, studio visits and exchanges of ideas, the resulting exhibition presents artwork and essays by eight pairs of artists and art historians, all of whom currently teach in Oregon colleges and universities.

The objects on view reveal how each artist deals with the frisson between concept and materially-based practices rooted in particular craft-oriented techniques, media and istories. For the art historians, whose research interests range from Gothic architecture, modernism and film to landscape, psychoanalytic theory and commodity exchange between China and Europe, the project was an exciting opportunity to step outside normal research boundaries. As a process-oriented exhibition that integrates objects and writing, Call + Response centers dialogue and inquiry around the vital question of how craft is engaged in contemporary critical discourse.

Read essays from the eight pairings of art and art history faculty members from Oregon colleges and universities.

Essays for each of the eight pairs of art and art history faculty members from Oregon colleges and universities are available on the Call + Response website.

Strategies for Loss: Thinking and (Re)Making the Past
By Abby McGehee (Oregon College of Art and Craft) 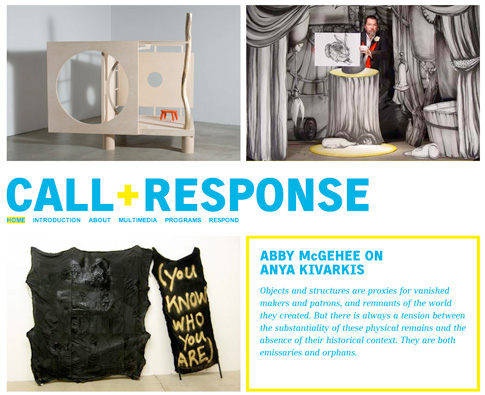 In the first of a series of three public discussions, Rob Slifkin, an art historian from Reed College, and Studio Gorm, a product design team from University of Oregon, describe the writing and studio works they contributed to Call + Response, as well as their collaborative processes leading up to the final museum presentation.

In the second on three public discussions, Matt Johnston, Lewis & Clark College, speaks about the work of Karl Burkheimer, Oregon College of Art and Craft.

In the last of a series of public discussions, Pacific Northwest College of Art faculty Anne Marie Oliver speaks about the work of David Eckard.

Fiber and multimedia artist Anne Wilson, professor at the School of the Art Institute of Chicago, presents a CraftPerspectives Lecture, “Liminal Networks.” Wilson discusses her work using pixilation and projection to dematerialize and reanimate work that began on the border between drawing and object making, and remains liminal in whatever new medium it enters.

Drawing on the musical concept of “call and response,” this exhibition provides a rare platform for artists and art historians to engage with each with other in dynamic conversation. This multi-layered exhibition features diverse works by eight pairs of art and art history faculty members from colleges and universities who have taught in Oregon for roughly ten years or less. Through multimedia content, contextual writing, the presentation of studio works and public programs, this intriguing project celebrates and provokes the recent influx of ideas brought to Oregon by these faculty members—who are breaking ground within their fields nationally and internationally. In effect, Call + Response considers what role these individuals, and their institutions, play within the state’s shifting creative landscape.