Several examples of Herrick’s “Op” weavings are included to show how she moved from simpler overshot-based “Op” weavings to pieces with calligraphic lines and complex planes of color. Each piece includes Herrick’s signature mixing of multi-colored threads, adding another dimensional layer to the optical illusions on the surface of each weaving.

Laurie Herrick’s archives include notes and drafts for the creation of Three Giraffes (Collection of the Museum of Contemporary Craft). The notes, however, were written for Herrick’s personal use, and not formatted as one might find in a weaving magazine or book today. Through careful observation and analysis of the weaving, Curatorial Intern Kristin Pesola used PixeLoom software to translate Herrick’s drafts accessible formats. In addition to a PDF with notes and images of the profile, threading, treadling and tie-up drafts, a zip file for those with access to weaving software that supports the WIF format is available below. The drafts are available for anyone to download, personalize, and to then share their interpretations or variations of Herrick’s work on the Laurie Herrick Flickr Group.

Download a ZIP file of Three Giraffes; compatible with weaving software that supports the WIF format.

Upload an image of your work based on Herrick’s profile draft to the Laurie Herrick Flickr Group. 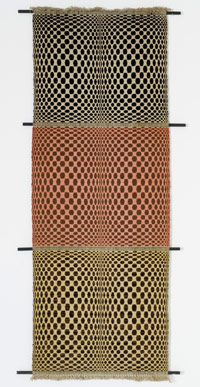 A strong interest in optical illusion surfaced in painting and popular culture in the mid- to late-1960s. The movement is perhaps best known in art circles through the works of Bridget Riley (born 1931) and Victor Vasarely (1906–1997), who manipulated the lines and geometric forms of grids to create a visual effect of movement and to alter the viewer’s sense of depth and space.

Files kept by Laurie Herrick reveal how quickly weavers engaged this use of pattern through contemporary weaving. Expanding on an initial approach outlined by California weaver Polly Yori in a 1968 weaving guild newsletter and workshop, Herrick spent the next several decades experimenting with multi-hued “Op” Art weavings. To create these patterns, Herrick adapted a traditional weaving structure known as overshot, in which decorative supplementary or extra weft threads float over the ground cloth. By creating “spots” of graduated size and various colors, she created optically-illusive patterns through weaving. In other words, removal of the colored threads that form the “dots” leaves a basic plain weave structure; the optical illusion is created by moving the weft (horizontal) threads in and out of the ground cloth. By manipulating the placement and length of these supplementary threads, Herrick moved from simple to increasingly complex optical patterns through her weavings.