When Curatorial Assistant Lauren Raburn organized clippings, files, samples, notes and more from Laurie Herrick’s archives into a series of inspiration boards, the cultural influences that shaped her work became clear. Inspiration boards are tools often used by designers in various stages of a project as a way to organize ideas, images and information. The pieces that were used in Raburn’s collages became the foundation of the “yesterday” sections.

Herrick spent 10 months working on the commission for First Unitarian Church, Portland, Oregon, one of Herrick’s many commissions for churches and synagogues in Oregon still in use today.

Laurie Herrick’s archives include notes and drafts for the creation of Tree of Life (Collection of First Unitarian Church, Portland, Oregon; ¼ scale version in collection of Ann and Jon Sinclair). The notes, however, were written for Herrick’s personal use, and not formatted as one might find in a weaving magazine or book today. Through careful observation and analysis of the weaving, Curatorial Intern Kristin Pesola used PixeLoom software to translate Herrick’s drafts accessible formats. In addition to a PDF with notes and images of the profile, threading, treadling and tie-up drafts, a zip file for those with access to weaving software that supports the WIF format is available below. The drafts are available for anyone to download, personalize, and to then share their interpretations or variations of Herrick’s work on the Laurie Herrick Flickr Group.

Download a zip file of Tree of Life; compatible with weaving software that supports the WIF format.

Upload an image of your work based on Herrick’s profile draft to the Laurie Herrick Flickr Group.

Summer and Winter on Opposites 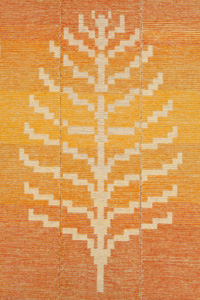 In 1965, a fire nearly destroyed the First Unitarian Church of Portland. Tragically, important weavings created in 1944 by Anna Belle Crocker, who directed the Portland Art Museum from 1906–36 and by her sister, Florence, were damaged beyond repair. Many people, including internationally-renowned textile designer Dorothy Liebes, considered the Crocker sisters’ tapestry to be one of the most significant ecclesiastical weavings in the United States at the time. To replace the damaged work, four Northwest weavers were invited by the church to submit proposals based on the original tapestry’s “Tree of Life” theme. One of the oldest archetypal symbols, the “Tree of Life” spans religions and cultures from across the world.

Herrick was awarded the commission, and spent the next ten months working on drawings, design studies and the quarter-scale weaving included in this exhibition to complete her work. Using a traditional early American coverlet weave structure known as Summer and Winter, Herrick created her design by weaving block “on opposites”: one side of the piece shows a neutral tree on a colored background, and the other shows the reverse. This allowed the piece to have two different appearances, and was intended to be changed with the seasons.

Installed in the church in 1970 and still on view today, Herrick’s Tree of Life is a three-panel tapestry that spans ten feet by sixteen feet and weighs forty pounds. The work illustrates Herrick’s signature mixing of colored threads to create a distinctive palette: yellow-green mixed with dark reds, oranges and yellows for the colored areas, and a green-yellow, natural white and gray for the neutral parts.