Producing a draft for the Open Warp weavings proved difficult, largely because of the intuitive ways Herrick created the works. Close investigation of the images in the “today” section can provide ideas for how to create similar effects and structures today. Kay Sekimachi’s The Weaver’s Weaver: Explorations in Multiple Layers and Three-Dimensional Fiber Art (2010) is an excellent place to start investigating dimensional and Open Warp weaving.

Upload an image of your work based on Herrick’s Open Warp weavings to the Laurie Herrick Flickr Group. 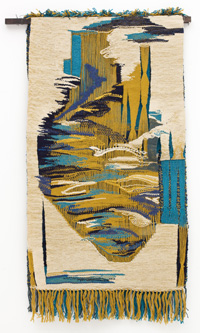 Loom-based weavers, including Laurie Herrick, experimented with similar structural and expressionistic approaches. Working within the rectangular format, Herrick created a series of woven “paintings” in which multiple layers are interwoven, threads are left unwoven and sections break the ground plane. The complex structure employs a wide range of weaving techniques while still remaining true to Herrick’s personal palette, mixing light, bright, and dark tonalities of color, and her preference for natural fibers. Unlike a painting which remains visible in its entirety on an easel or studio wall, a weaving is continually wound into the cloth beam on the loom as it is being completed. This means that loom-based artists must weave without actually seeing the total work as it develops. In order to deal with this limitation, Herrick would unroll the work in progress and examine it, use mirrors to see the reverse side, and occasionally make adjustments on the final weaving after it was off the loom.

Sifting through Herrick’s archives reveal how shifts in weaving practices from earlier decades contributed to Herrick’s experimental Open Warp weavings. During the 1940s, for example, handweavers often created wall and window coverings that combined slats of bamboo or wood with natural and synthetic fibers. Herrick’s Redwood series references this type of work, but shows important changes that demonstrate how weaving shifted during her lifetime. Unlike the wall dividers or window coverings of earlier decades, Herrick’s Redwood V (1969) takes the non-functional form of a wall hanging. A decorative weaving, the redwood slats are rough-hewn and the palette forest-inspired; there is little here that speaks of functionality. Redwood V is a visibly personal response to how a forest looks. Using natural materials, a carefully selected palette and open warp techniques that capture the layering of colors and textures found in the woods, Herrick’s work shows an important shift in using weaving to create a personal response rather than a functional form.

During the 1950s, many companies such as DuPont employed handweavers across the country to develop commercial markets for new, synthetic fibers and products, such as Orlon® acrylic, Dacron® polyester and Lurex® metallic yarns.  While working in Martha Pollack’s design studio in California, Herrick learned first-hand how to combine synthetic and natural fibers with traditional weaving structures, resulting in new textiles for use by interior designers and architects. This experimentation taught Herrick to weave with a mixture of yarns and threads with different tensile properties, as some stretched more than others. On view, but not pictured here is the earliest piece woven by Herrick in the exhibition. Rainforest (c. 1950) shows how adept she and weavers of her generation became with working with combinations of natural and man-made fibers. Here, the open weaving structure is balanced by carefully placed areas in which thick wool felt is inlaid onto the looser ground plane. The final piece shows Herrick’s ability to create stable textiles. She balances the piece in two ways: compositionally, she mixes open and dense areas to break up the space, and physically, her construction techniques ensure that the threads in more open areas remain loose rather than pulled down by the weight of the weaving.

Weaving continued to shift away from exclusively functional work to also include expressionistic forms in the 1950s and early 1960s. Lenore Tawney (1907–2007), for example, developed an open warp weaving technique that allowed weavers to use the loom to create many shapes in addition to squares and rectangles, and to create layered weavings in which portions were unwoven or transparent. As the 1960s continued, artists such as Magdalena Abakanowicz (b. 1930), Sheila Hicks (b. 1934) and Gerhardt Knodel (b. 1940) pushed even further away from a domestic scale, wove off the loom, and created large-scale conceptually-based works that employed weaving techniques and moved away from the rectangular shapes most easily produced and associated with weavings made on a loom.