Herrick returned to Eliot Porter’s images to create numerous weavings based on his photographs. Using a cartoon, or drawing to guide the construction of a tapestry or weaving is a long-standing practice. Herrick based many of her weavings on photographs, dividing the image into grids and selecting a range of colors and materials to weave her pictorial interpretation of the image. The creation of a pictorial weaving today could begin with an exploration of Theo Moorman’s Weaving as an Art Form: A Personal Statement (1986) and Herrick’s personal working method to provide additional weaving options.

Upload an image of your work based on a pictoral weaving to the Laurie Herrick Flickr Group. 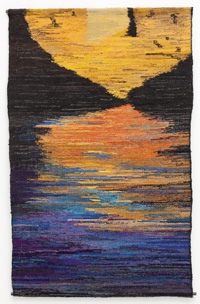 Working in color at a time when “serious” photography remained black-and-white, photographer and environmentalist Eliot Porter brought renewed public attention to the grandeur of the American landscape. The Sierra Club, for which he served as director from 1965 to 1971, published Porter’s first two photography books, including The Place No One Knew: Glen Canyon on the Colorado in 1963. Laurie Herrick’s well-worn copy reveals its ability to inspire both environmentalists and artists. Several pages contain notations and grid marks that reveal how Herrick divided Porter’s images into measured sections to form the basis for a series of pictorial landscapes.

Her travel notes from a June 7, 1972 trip to Denver and Detroit provide insight into Herrick’s continual observations about the natural world:
“Midwest-farmlands-tapestry! As far as the eye can reach. Beautiful earth. Areas smaller more architectural less rugged. Muddy Mississippi!  Much muddier than our rivers. A wide brown ribbon. Most interesting residential section outlying Detroit. Evidently plush. Swimming pool in every garden. Most round! Some oval – few rectangular. Very blue. Ones with people in (apparently) rippling mirror-like surface reflecting. Others just blue, blue circles.”

Herrick created a number of pictorial weavings using an inlay technique similar to that of her friend, noted British weaver Theo Moorman (1907–1990). Moorman, like Herrick, was part of a generation of weavers who moved away from functional textiles to the creation of woven wall hangings and art pieces as forms of creative expression. While Moorman’s technique involves using both thick and thin warp (vertical) threads to hold the yarns in a nearly invisible structure, Herrick used thicker warp threads exclusively.

Herrick’s weft threads were made of mixed bobbins of 4–5 threads in different colors and textures.  In some cases she used fur, cedar bark, or unspun wool. Her technique differs from tapestry weaving, in which color changes are part of the structure rather than on the surface of the cloth. Herrick’s approach offers flexibility to switch between different types and thicknesses of fibers.